As a graduate of the Maryland Institute, College of Art in 1971, Douglas Gillette began his professional career as an illustrator for the Johns Hopkins University.  During that time, he furthered his education by earning a Master’s Degree in Art Education from Towson University.  While at Johns Hopkins, various pieces of his artwork were exhibited at the Smithsonian Institution and the Departments of the Interior and Defense in Washington, D.C.

Upon moving his family to Lynchburg, Virginia in 1976, Doug assumed two roles, one as Art Director of the Lynchburg Fine Arts Center where he taught drawing, painting and printmaking, and the other as Associate Professor of Art at Central Virginia Community College, teaching drawing, painting, graphic arts, printmaking and art history.

In keeping with his philosophy that drawing should be the foundation of most artwork, Doug has spent many years developing a finely detailed drawing and painting style that has earned him numerous awards and recognition.  Doug has had four one-man shows, two at the Lynchburg Fine Arts Center in Virginia, one at Sweet Briar College in Amherst, VA, and one at Western New England College in Springfield, MA.  In addition, his work was featured in a two-man show at Western New England College.  Other exhibitions and awards include Best of Show at the 2003 Monson Arts Council 10th Annual Spring Art Exhibition, acceptance in the 2003 Birds in Art Show, and best drawing and painting awards in numerous New England area juried and invitational shows.   Doug’s work has benn published in several art publications.

Currently, Doug’s home and studio is in Enfield, CT, where he applies his skill on works of fine art.  He is president of the Academic Artists Association and past-president of the Connecticut Academy of Fine Arts. 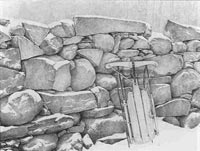