Predominantly a still life painter, Eleanor Driscoll also features landscapes and seascapes in her collection of work. Her paintings appeal to many art enthusiasts because of the feeling of familiar objects and environments. She tries each time to impart the pleasure she experienced when first viewing the particular subject. She is greatly influenced by the Old Dutch and Flemish masters.

“I choose oil as my medium because I like oil to build up glazes,” she says “giving a feeling of depth and solidity; overlapping and working into the painting rather than drawing edges.”

Eleanor has studied many years with the late Helen Van Wyk (teacher, friend and mentor); the late Jack Callahan; the late Charles Vickery and Don Stone. She has had several shows and received numerous awards over the past twenty-five years of painting professionally. Mrs. Driscoll was featured in the Grumbacher publication “Palette Talk” and assisted the editor of a recently published revision of a book on floral painting by Helen Van Wyk. Her paintings can be found in many New England private collections. 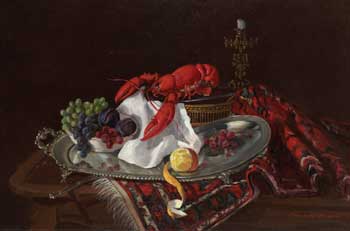