Born in Saugus, Massachusetts, in 1955, Gary Davis draws his inspiration
from personal experience and his New England surroundings.
As a young boy Gary spent much of his time outdoors, whether with his grandfather
on his fishing boat, or with his father at the ballpark and later on the golf course.
Back home he would use paper and canvas to express his love of these activities.

Encouraged by his high school art teacher, George Palmer, Gary followed his passion
as a career path and in 1980 he earned a BFA from Massachusetts College of Art.
Gary developed a successful career as an illustrator,
with clients as diverse as Reebok, Puma, Blue Cross/Blue Shield
and Ryder Truck. His editorial illustrations regularly appeared
in magazines including Inc., Boston, Yankee, and Fidelity Investments Focus,
as well as in numerous annual reports, collateral materials
and admissions brochures for Harvard University,
University of New Hampshire, and Tufts University.

Gary is a member of the Copley Society of Art in Boston
where he has exhibited his work. His oil landscapes, marine and sports paintings
have been placed through corporate art buyers
as well as private commissions who share his passion.
His work has been shown in galleries in Newport, Rhode Island, Carmel, California,
and Cooperstown, New York, as well as various locations in Massachusetts.
In 1991, Steuben commissioned Gary to create the image
for “The Pitch” which was translated into a crystal sculpture.

Gary has been an invited artist and participated in several
plein air workshops given by artist Donald Demers.

Gary lives in Wakefield, MA, with his wife Cindy and their dogs Buck and Sadie. 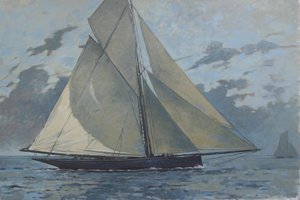 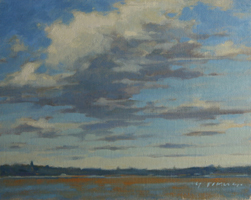