2018 Winner of The Artists’ Choice Award at Easton Plein Air

Mark Shasha (b. 1961) is an award-winning American artist, author and educator.
His work has appeared in museums, galleries and publications for almost 40 years*. His work is found in public and private collections around the world.  And millions have read his children’s books which he has written and illustrated.

After college at Rhode Island School of Design in 1983 Shasha was a frequent illustrator for the Boston Phoenix, The Globe and many other publications. His first children’s book, Night of the Moonjellies (Simon & Schuster, 1992) won a Marion Vannett Ridgway Honor Award and was welcomed by Smithsonian Magazine as “a classic.” It continues to appear on some bestseller lists.

His work led to invitations to hundreds of schools and libraries where he delighted thousands of children with his stories, songs and drawings. In recognition of his “outstanding contribution to the education of young people” Mark was given the Shining Star Award by The Children’s Museum of Southeastern Connecticut.

In recent years Shasha has shifted almost exclusively to oil painting. His artistic focus is the light and texture of the natural world which he approaches in a traditional style with techniques of 19th and 20th century masters.  Today, Mark is often included among the top plein air painters in notable art events across the country such as Forgotten Coast en Plein Air, Plein Air Easton, Cape Ann Plein Air and En Plein Air Texas.

He is a Signature Member of the American Society of Marine Artists and an elected member of The Salmagundi Club, The Guild of Boston Artists, The Copley Society, Rockport Art Association & Museum, North Shore Arts Association and other venerable art institutions.  His recent awards include the 2018 Plein Air Easton Artist’s Choice Award, Oil Painters of America Award of Excellence and The Alden Bryan Memorial Award for Excellence in Landscape Painting (awarded to Shasha twice in one year).

Shasha also frequently appears on stage as an actor and singer. Recent roles include Atticus Finch in To Kill a Mockingbird, The Best of Broadway, The Miracle Worker,  Twelve Angry Men and Willy in Willy Wonka. He often sings with the Hillyer Orchestra in Salem, Massachusetts.

Mark also performs his multi-media presentation “Art Up!, a riff on the enduring, life-enhancing ideas of the Enlightenment.
*Full lists of exhibitions, awards and publications available upon request. 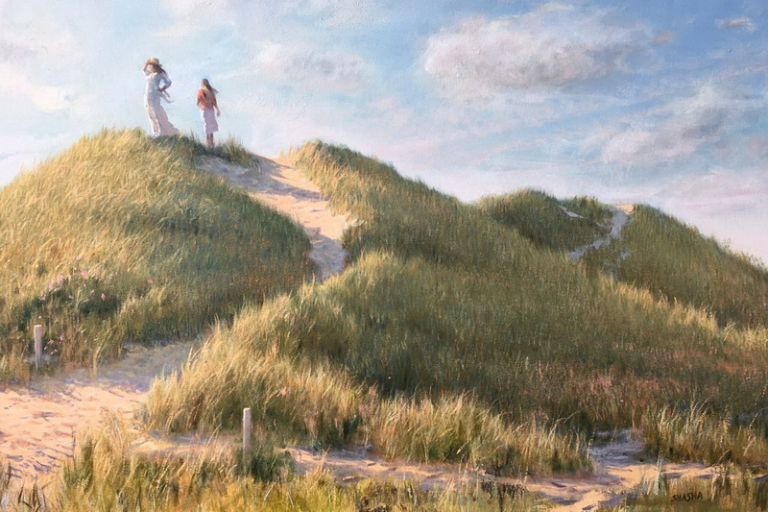