Paige Wallis grew up in Huntsville, Alabama where her mother often told her that she ‘carried the art genes’ from her great grandfather, Alfred Lowe who studied at the Museum of Fine Arts School in Boston and was later the senior restorer for the MFA. Paige’s family moved to Toronto, Ontario where she attended the Etobicoke School of the Arts high school and she began her formal arts education as a visual arts major. She later returned south to further pursue art at the Savannah College of Art and Design in Georgia, receiving her BFA with a specialization in illustration. In her final year at SCAD, Paige received an honorable mention in the New York Society of Illustrator’s Student Show as well as SCAD’s Award for Excellence in Illustration. Paige finally settled in the Boston area in 2002 and began truly pursuing her fine art career in 2007. Since then, her work has exhibited around the country, won several awards and been featured in the September 2012 The Artist’s Magazine Competition Spotlight.
Paige’s preferred media are watercolors and acrylics. Primarily a realist, her watercolors tend to be more earthy and worldly, while her acrylics are ‘heightend’ and idealized versions of reality, more slick and less gritty.

“With my paintings I’m just celebrating the beauty I find in the world, from the natural to the man-made and the confluence between the two.  I like the challenge of filtering what I see through my eyes, brain, nerves, muscles and fingertips onto a two dimensional surface. I think I was born hard-wired to be an artist of some sort. One of my earliest memories is of when I was very small and used to suck my thumb, I would stroke my face with my index finger and imagine it was a paintbrush.” 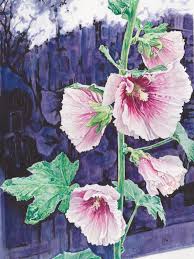