Often described as an Impressionist, Rokhaya prefers the term Lyrical Expressionist in that her aim is to reveal through emotions, rather than record impressions.  She likens her process to cooking and gardening, where colors, flavors and textures combine intuitively.  She compares her paintings to poetry and music- interweaving rhythmic phrases of melody and harmony.  Passion and the passage of time are an integral part of her work.

Waring was born in 1966 in Santa Fe, NM..  French by her mother and American by her father, her dual-nationality and extensive travel have had a profound influence on her work, as has her homeschooling.  In 1972 after a year in Florence and another in Paris, Waring’s parents settled in Rockport, MA and founded La Petite Ecole out of their own home, now Waring School.  Her most lasting memories are of days there, the outdoors and the hand-made, camping across America, printing on an antique letterpress, milking goats, baking bread… and above all, sketching daily.  The habit of visually recording the natural world has not only helped keep memories alive, but has become the foundation of her artistic technique and vision.

After graduating from Princeton with a BA in Art History/Visual Arts, Waring spent her first summer painting in the Provencal village of Forcalquier.  Her principal home for most of the next twenty years, this cultivated yet rugged landscape perfectly suited her artistic vision, providing inexhaustible inspiration.  She has also spent time painting in Paris, Israel, Tahiti, and various parts of the U.S..  In 2008 Waring moved to Gloucester, MA, where her Home Studio is open year-round by appointment.

Waring has exhibited in over 40 solo shows, over 60 invitational or juried shows in the U.S. and France, and has won many awards.  She is a member of Oil Painters of America, American Impressionist Society, North Shore Arts Association, Rocky Neck Art Colony, has shown at the Salon Des Artistes Français and the Salon d’Automne in Paris, and at the Currier Museum of Art.  Her commissioned oil paintings are featured on Tru Fragrance & Beauty’s line of products.  Waring is featured in “100 Artists of New England” (Schiffer 2011) and in “The American Flag in Contemporary Art”, (Schiffer, 2015).  Notable collectors include Carl Crossman, art dealer and appraiser for Antiques Roadshow, U.S. CTO (2009-2014) Todd Park, Andre Agassi, and Brooke Shields. 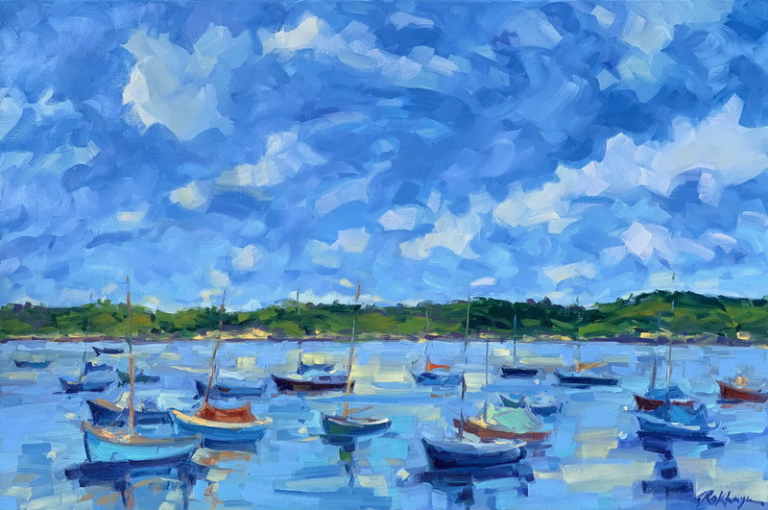