As a painter from life or plein air painter,  Stephen LaPierre follows the sun by day, mixing and applying his colors to create  astonishing dayscapes  of shadows and light. At night he finds available artificial light to birth his magical nightscapes, with each piece worked completely on site from DIRECT OBSERVATION ; never from a photograph.

Living his mantra,  Paint Paint Paint, LaPierre began his career  painting the mills, the streets  and the shadows of his hometown of Haverhill, Massachusetts, on the banks of the Merrimack River. A self-taught painter from the school of hard knocks, he was first encouraged to paint by Susan Paradis at Haverhill High School in the late 1970’s, when he quickly  found himself  inspired by the likes of Pablo Piccasso, Vincent Van Gogh, and Salvador Dali.

A decade later, LaPierre left his energy conservation career, successfully bartered a mural of downtown Haverhill for a semester’s tuition at Northern Essex Community College,  and began life as a full-time working artist. That early Haverhill  commission, now hangs in the lobby of Northern Essex’s Sperk Building. LaPierre then moved on to study briefly at Massachusetts College of Art with Boston artist, Ed Stitt.

In 1992 LaPierre opened his Haverhill studio at Stevens Mills, moving it in 1996 to  a huge unheated third floor Washington Street industrial space overlooking the Merrimack River. He then proceeded to trade plein air and studio paintings for his studio/apartment over  the next twelve years.

In 2000,  LaPierre continued his plein air work  in Italy, adding pieces from Rome, Florence and Venice. On his  return to the States, he soon became known as “the artist of darkness” in Newburyport, MA, capturing the never-ending red brick architecture of the seaport city by night, as well as by day. During this time,  LaPierre  was also privileged to participate in Don Stone’s final plein air workshops on Monhegan Island, ME.

In 2007,  LaPierre found himself stranded at Marina Hemingway in Havana, Cuba, on his brother’s sailboat. As the two men waited for  replacement parts to arrive, LaPierre’s Havana Collection was created.

In his extensive Key West Collection (2010-2015), LaPierre captured the brilliant sub-tropical sunlight and the southernmost city’s sparkling night lights, as he documented the continuing pirate and conch magic of North America’s favorite playground at the beginning of the 21st century.

a member of the Rocky Neck Art Colony since the spring of 2016, LaPierre is a member of both the Northshore Art Association and Rockport Art Association and Museum as of 2019 (*) , continuing his plein air work, while also creating new studio pieces in his allegorical, Clowns with Cell Phones Series, in his Madfish Alley studio/gallery/home,  at the end of the Neck.

An interesting addendum:  LaPierre’s first Rocky Neck Studio, on Madfish Alley,was the same space where the British sculptor, Leonard Craske, created Gloucester’s Man at the Wheel statue in 1924. Craske, a noted North Shore sculptor,  won this international competition to create a memorial honoring the thousands of Gloucester fishermen lost at sea over the centuries, on the occasion of  America’s oldest seaport’s 300th birthday in 1925.

LaPierre has since moved his studio, gallery and living space to year-round quarters on the second floor, at 75 Rocky Neck Ave, at the head of Mad Fish Alley. 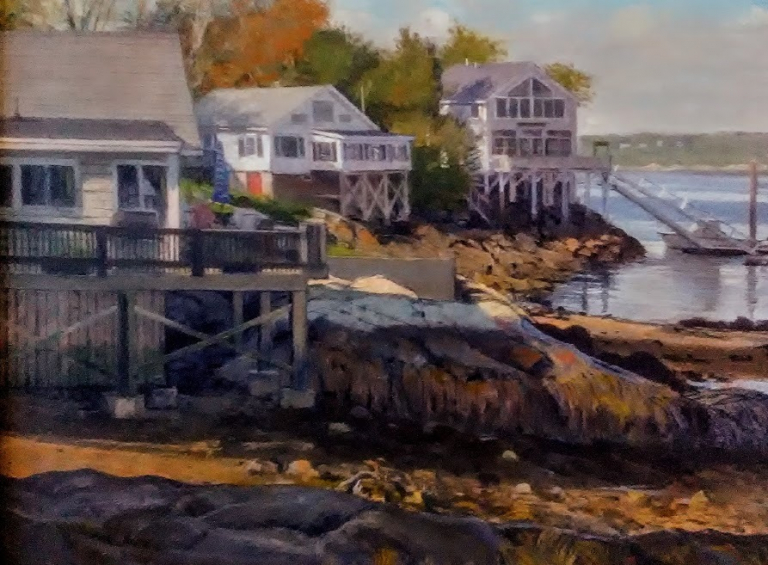