William E. (Bill) Duke formally studied art at UCLA and the La Jolla Art Institute under the mentorship of Fred Holle. Enjoying art history with intense interest, Bill delved into the processes used by the Masters and became fascinated with the ability to recreate the subtleties of light, shadow, reflection and contrast in the various available mediums. His talent developed quickly and in the late 1960s Bill began a freelance career. He immediately found work in Illustration and then discovered another natural talent: Teaching. His dual careers flourished.

Moving to the East Coast in the late 1970s, Bill rebuilt his freelance career in the Connecticut corridor working with various corporations and advertising agencies based in Connecticut, New York, and the New England area. During that time he won two Gold First Place Merit Awards from the Advertising Club of Western Massachusetts and a First Place Holland Award from the Ad Club of Worcester for his work in the category of Advertising Illustration.

In 1982, to continue his teaching career, Bill became an instructor at the Art Institute of Boston in Kenmore Square, holding Art Foundation courses and Illustration Techniques courses in all mediums. Then in 1985, he co-founded the Northampton School of Design in Northampton, Massachusetts. Students clambered to fill his classes in Watercolor Painting, Illustration Techniques, Drawing, and Art Foundation courses.

In 1995, Bill was discovered by Hasbro toys and was hired as the Senior Creative Illustrator of their Research and Development Department. After a number of years in the corporate world, Bill decided to change course once again.

Bill now makes his home on the North Shore of Boston near the marshlands of the Atlantic barrier islands. The unique landscape of this region inspires him. The challenge to recreate the beauty before him is all encompassing; and his knowledgeable eye guides the years of experience behind his brush.

Bill has come full circle with his love of art from his early experiences with design and composition in every medium with Illustration, to creating fine art in oils, and his personal favorite medium: the freshness of watercolor. He also continues to enjoy sharing his broad background in art history and the various drawing and painting techniques he’s mastered by teaching both privately and in small classes. 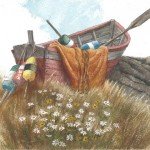 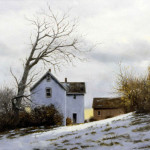